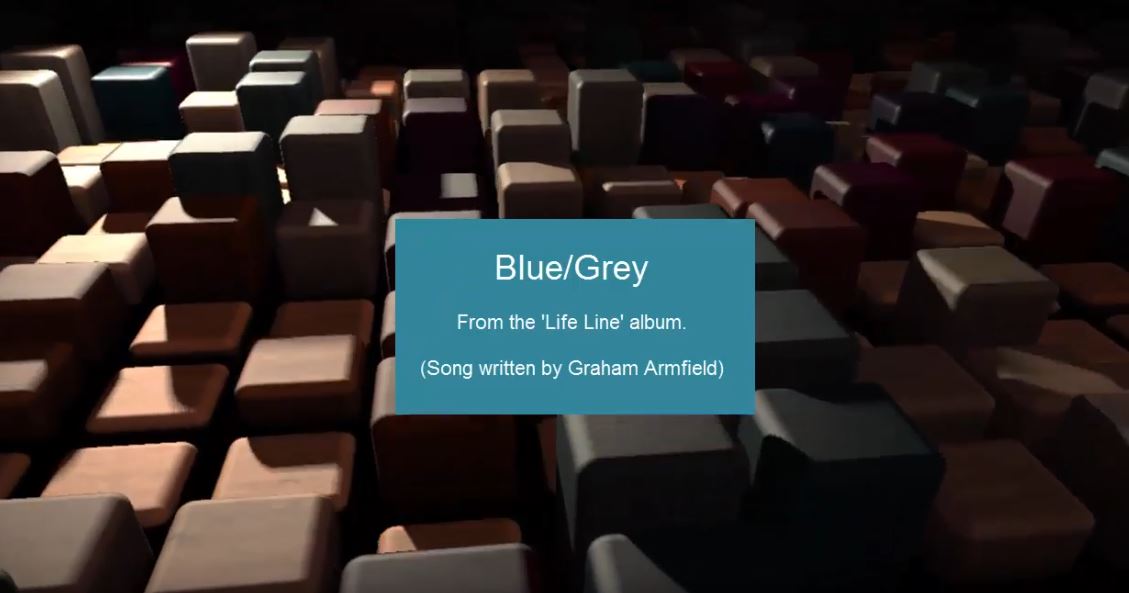 Blue/Grey is featured on the Life Line album from 2009.

Blue/Grey is on Spotify.

When I read my newspaper, you’re right by my side,
With your new book, hide the bookmark inside.
Wearing your grey trousers and your blue top,
I love you literally, and I’m not going to stop.

See the weeds and flowers we picked in the wood,
Where the trees surrounded us, on the spot where we stood.
And the light as it changed from blue to grey,
Then I know it was the end of a perfect day.

On top of a rocky ridge, you showed me a lake,
All shrouded in mist, but that was the weather’s mistake.
Down, down to the valley, and as I looked at you,
I noticed the sky turn from grey to blue.

Although I don’t currently have a video of me playing Blue/Grey live, I did create this promo video some years ago using Shadertoy.

This one comes from the mid 1980s when I was playing in a band called The Aviators. I was living in Harringay in north London, and I’d just bought a twin-neck guitar (an Antoria SG copy) from a friend.

The flexibility of having 6-string and 12-string necks combined into one guitar suited the varied material we were doing at the time – I was able to switch from playing chords on the 12-string to the 6-string neck for the solo. But the guitar was unbelievably heavy.

One thing I discovered with the twin neck guitar was the sympathetic vibrations caused the strings on the neck that wasn’t being actively being played to vibrate as well. Switching the 6 string neck on, and playing chords on the 12 string neck gave rise to a curious drone sound from my guitar amp. When I changed to different chords the drone gradually coalesced around the new chord.

Playing around with this effect gave rise to a chord progression that I liked, which was the spur to the structure of the song.

The lyrics for the song recall a happy holiday to north-west Wales.